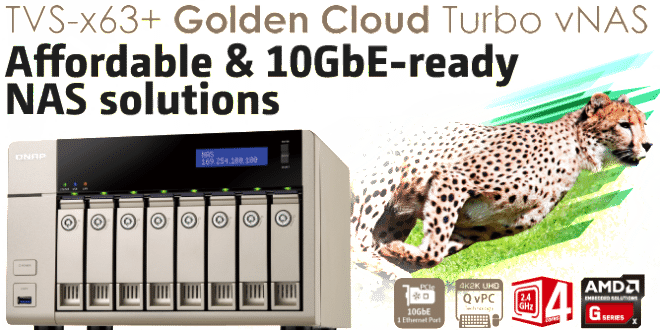 QNAP has partnered with AMD to launch the TVS series NAS .The latest addition to the NAS family will be powered by AMD G-Series quad-core SoC clocked at 2.4 GHz. The system will be equipped with either 4GB or 8GB of DDR3L RAM that is upgradable to 16GB. It will support SATA 6 Gb/s, two Gigabit LAN port and 10GbE capability via the PCIE expansion slot. They will come with 5 USB 3.0, 2 HDMI port, and LCD panel.

The TVS-x63+ also will work with QNAP expansion enclosures (UX-800P or UX-500P) to increase the total storage capacity to 192TB (varies by models) with advanced design of multiple volumes and storage pools.

Unlike other QNAP NAS devices that is often in either silver or dark metallic color. The new TVS-x63+ will come in golden color. They will be available later this month at various retailers. No pricing is given in the press release.