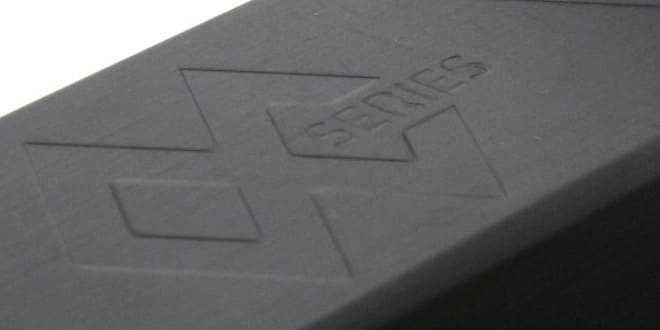 Prefetch tries to predict what users will load the next time they boot the machine by caching the relevant files and storing them for later use. We want to learn how the program runs without any of the files being cached, and we disable it so that each test run we do not have to clear pre-fetch to get accurate numbers. Lastly we disable Superfetch. Superfetch loads often-used programs into the memory. It is one of the reasons that Windows occupies so much memory. Vista fills the memory in an attempt to predict what users will load. Having one test run with files cached, and another test run with the files un-cached would result in inaccurate numbers. Again, since we can’t control its timings so precisely, it we turn it off. Because these four features can potentially interfere with benchmarking, and are out of our control, we disable them. We do not disable anything else.

We will use the following applications to test the performance of the Motherboard, Processor

NOTE!  Due to the early nature of the platform we have seen some very strange results form the platform on some benchmarks and have been told that updates to the benchmarks will be made to make them more compatible so stay tuned for future board reviews for better idea on scoring

For overclocking I only had one sample this go around and I had a kind of pre warning from manufacturers that the common clock is between 4.4-4.6 on air/water on these chips with some exceptional samples pulling 4.7GHz capable without going extreme cooling. 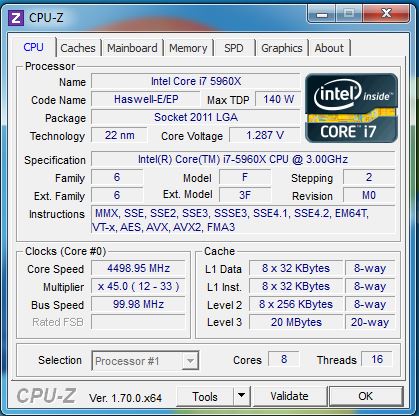 Here you can see our top clock with the XPOWER which is the same as we saw with the ASUS X99 Deluxe board. The MSI board took slightly Less voltage to reach top clocks which is nice to see as it means the tuning looks to be spot on for the XPOWER. You can see the voltage scaling in the below chart and as the chip ramps up major going from 4.4 to 4.5GHz.

Here you can see a breakdown of the voltages applied to reach the  target speed, but do note that I cannot verify if the voltages will match every CPU only time will tell how well each chip scales with settings but if history has taught us anything it’s that CPUs can vary by a lot so don’t expect to just plug in my exact setting and run well, but maybe this will help give you a baseline to start from.

When testing memory overclocks we found that the Corsair 2666 Modules can do around 2800MHz at pretty good timings but this does require a VDIMM raise to 1.35V which is not horrible but worth noting.  also do keep in mind that setting XMP many times will raide the BCLK divider to 125MHz so keep in mind to make sure CPU clocks are correct accordingly. 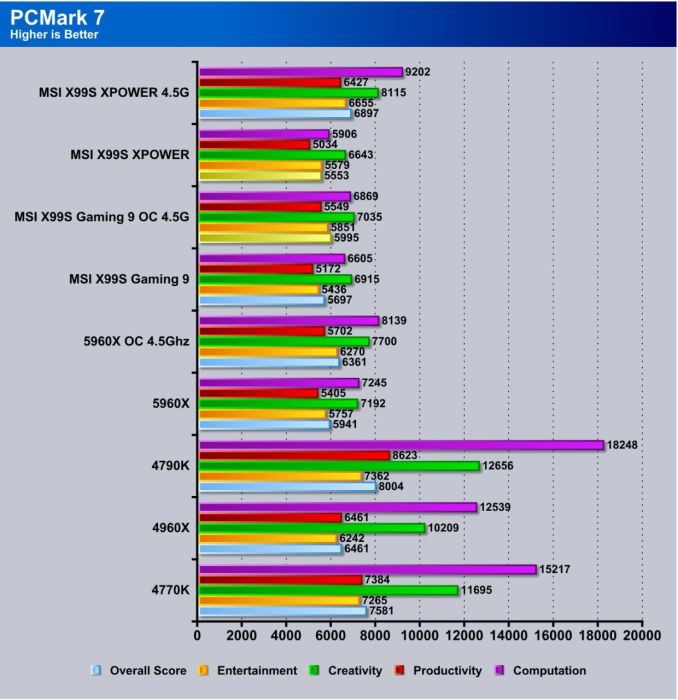 Futuremark after the update runs better with less bugs.  As you can see the XPOWER pulls a nice lead over the initial testing and its possible we may see slow growths of performance as updates and firmware improvements come down the pipe. 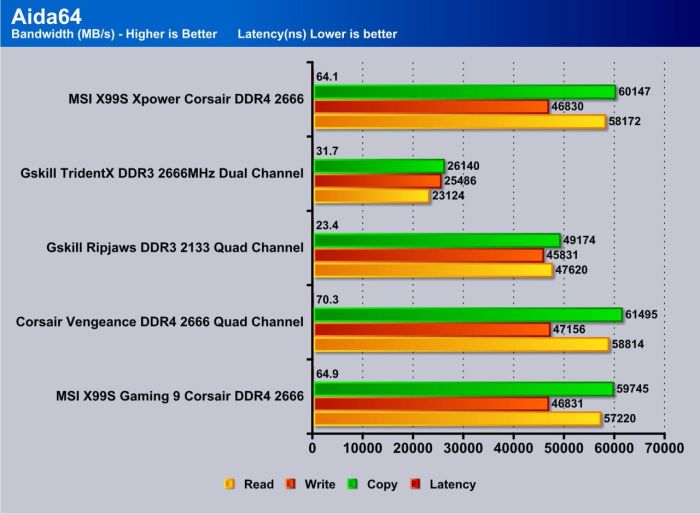 AIDA64 simply tests the memory and gives you raw input on performance for the memory bus and installed DIMMS. as you can see the new X99 platform with DDR4 can pull some massive bandwidth numbers but I was also a little shocked as to the high 70ns latency result. after the recent update the issue of slow startup of the benchmark is now remedied but the performance did not change and the latency seems to be dead set above 60ns but I must say that the MSI boards do well dropping latency to 64ns range which is still higher than the DDR3 we are used to it is better to see. 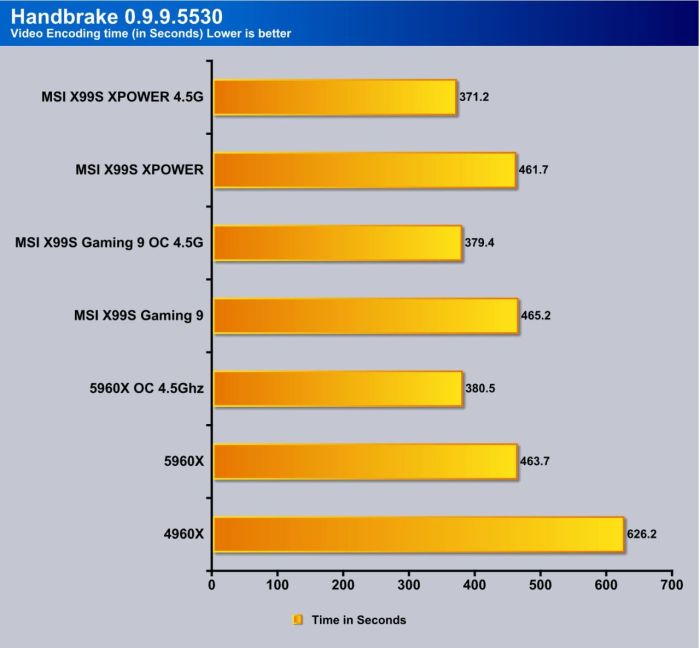 Handbrake is a free program used for transcoding video files. For this we used a 4K video file and ran it down to 1080 while manually keeping count of the time it took to process this via the CPU. as you can see when compared to the 4960X the new 5960X jumps far ahead and even almost halves the time once overclocked. Do note that the extra 4 threads will definitely help with this as the program utilizes all cpu threads when running the encoding operation. The XPOWER slightly edges out the original result here but the difference is marginal as this operation simply taxes the entire chip with constant load. 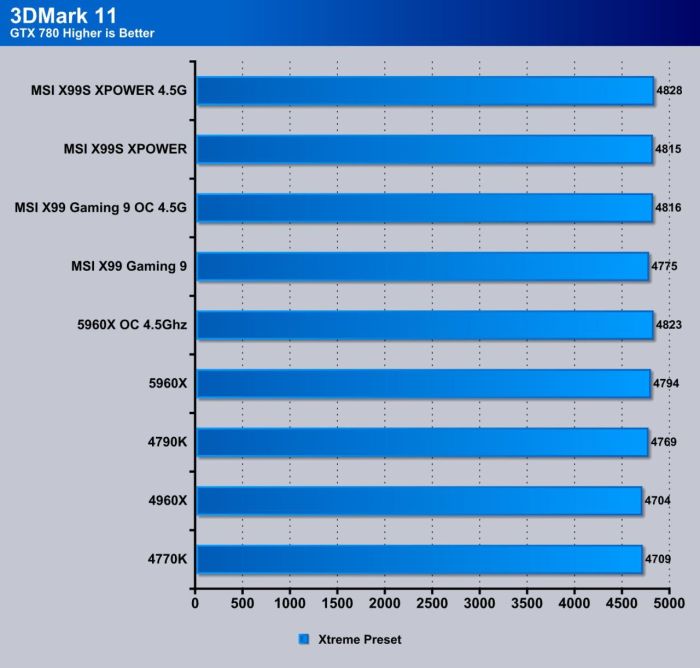 As mentioned before Futuremark updated their systeminfo apps and now the benchmarks run fine but nothing really changed in terms of performance. The XPOWER just like the other benches pulls a slight lead ahead of the previous tetsed boards. 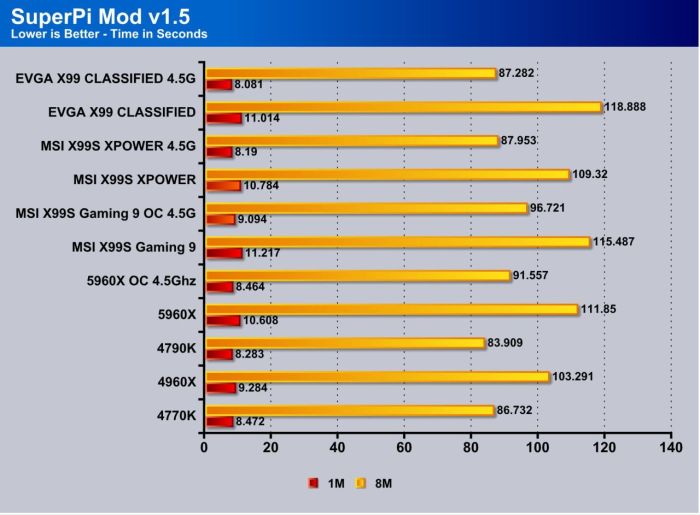 This tests single threaded performance and clock efficiency by processing digits of the number pi. Here you cann see that single threaded performance is not groundbreaking as it is beat out by the 4960X but I am very interested to see what a few BIOS updates will bring. As you can see even when overclocked the 4790K beats the 5960X so something I feel may be amiss here. The XPOWER takes another small lead here showing that as I thought the maturity of the platform may improve giving increasingly better results. 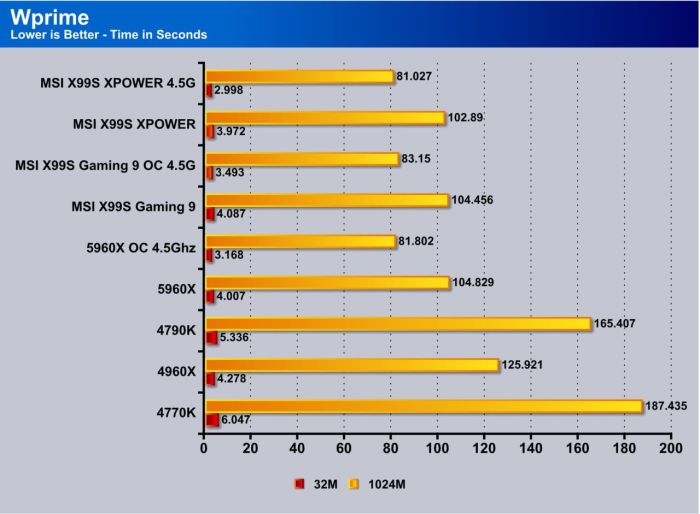 WPrime is similar to Superpi, but is multi core aware and you can set the core count. The 5960X with its 16 processing threads makes easy work of Wprime and gets us close to a run in the 2 second range on the 32M side when overclocked. The XPOWER pulls a decent lead here knocking some pretty serious time off the result which speaks well to board tuning and capability in terms of efficiency. 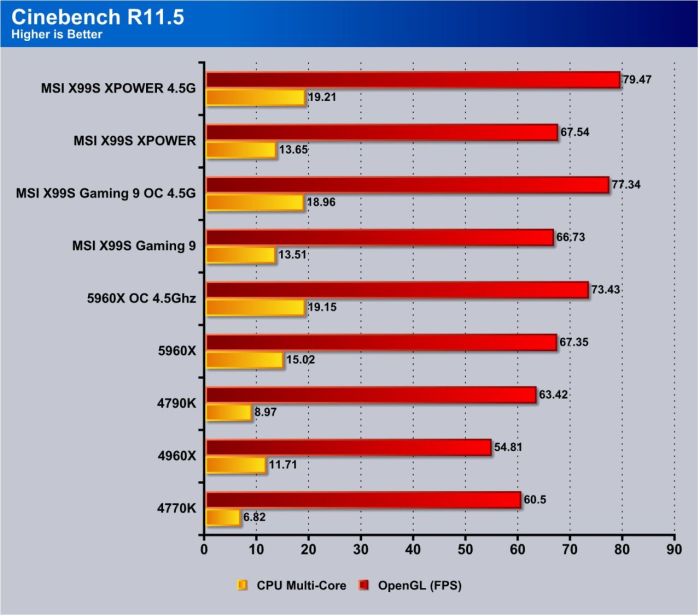 Here you can see where the high-end rendering work can be done. The 5960X once again flexes its muscle in a major way pulling in some crazy high scores for the CPU test and even more impressed with the OpenGL test which seems to have gotten a nice boost as well. Here the XPOWER shows an even better improvement than we saw from the Gaming 9 which is good and I hope is not just from the OC tuning but also maturing of the platform. 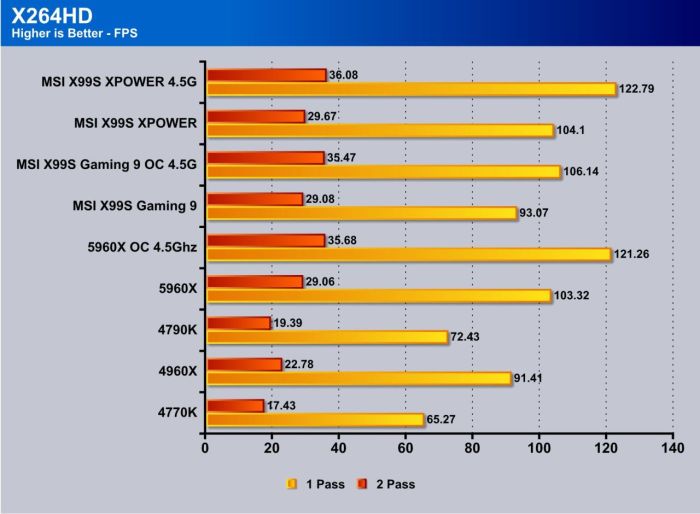 Transcoding has become more popular now and the latest Sandy Bridge and on processors added support for AVX instruction for faster video transcoding. Here again the 5960X is proving itself to be a work horse in these heavy loaded tasks as it chews thru them and gives scores higher than we have seen come through our test bench for any consumer part to date. OThe Xpower takes a noticable lead here with some excellent CPU performance. 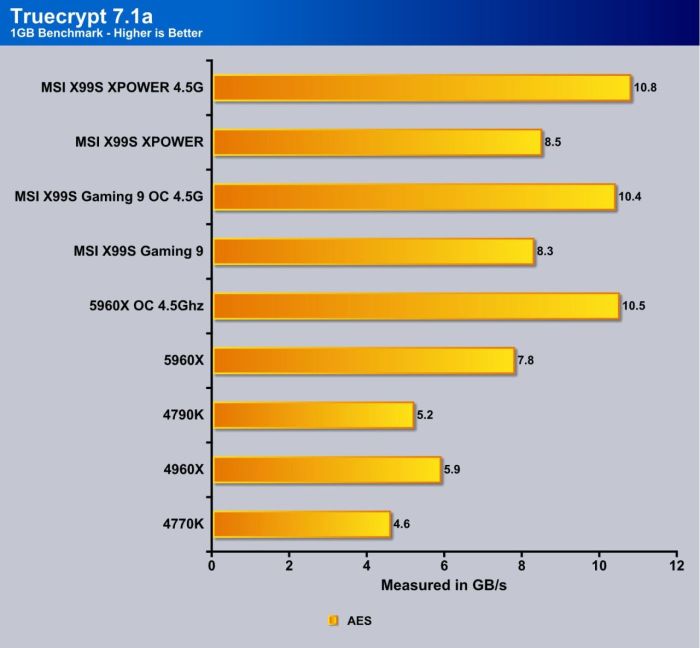 TrueCrypt is a real world application that gives a good indication of the true performance of our latest processor. The AES capability helps push the performance higher in the encryption performance and the super high core count with overclock added gives us out first double digit result in truecrypt on a consumer part. as you can see the outgoing 4960X is easily beaten by 2GB/s stock vs stock which is a huge performance increase. The XPower pulls slightly higher than the Gaming 9 and even more over the ASUS board for some very good results. 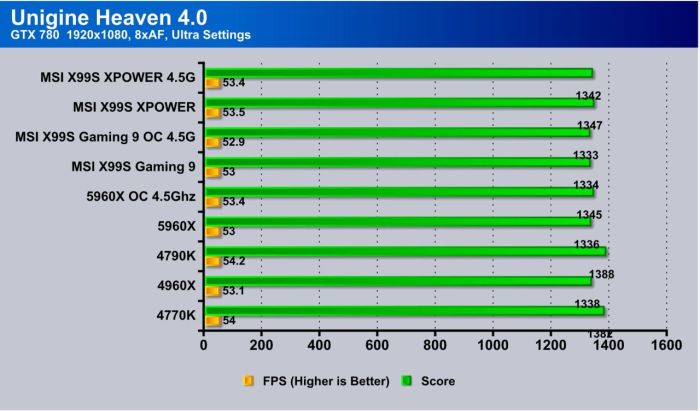 Unigine Heaven on a discrete GTX 780 sees very similar performance as the 3.0 PCIe bus simply moves more than enough data at great efficiency that there is really no major advantage from extra threads here. The thread count and even overclock does little to help here as its simply outgunned by the gamers dream 4790K chip. Heaven for the XPOWER was slightly higher once again than the Gaming 9. 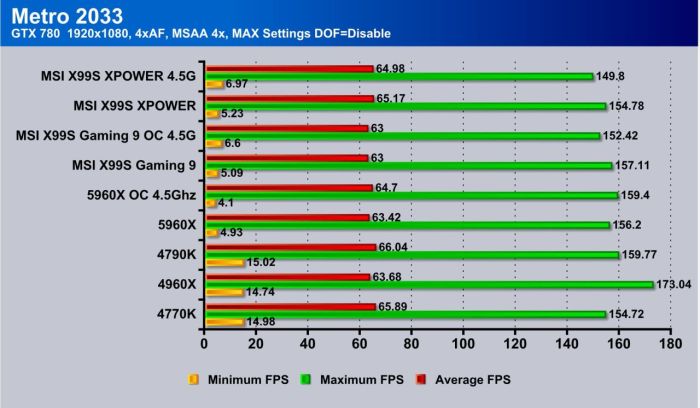 Metro 2033 is a torture test of a game and as we see X99 falls into line with XPOWER pulling a small lead here most likely some minor tweaks for 3D kicking this one in the pants. 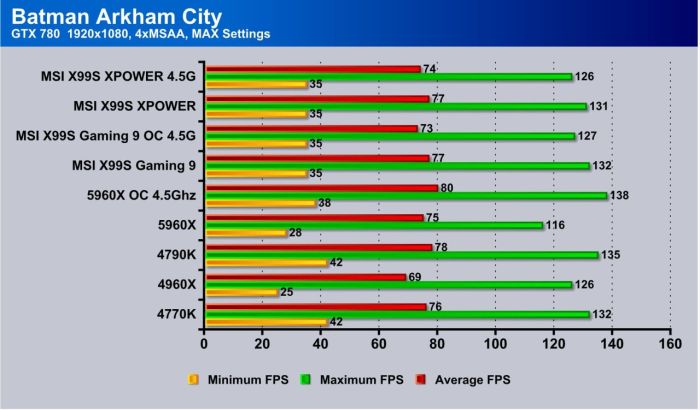 Batman Arkham City has been a staple of our benchmarking suite and it’s simply because it’s a fun game to play, its popular and offers many excellent technologies which puts a system to work. Here you can see that at stock the 4790K beats the average FPS against the X99 but when overclocked the X99 can pull ahead some but by the same token im sure the 4790K when overclocked could pull away some as well. 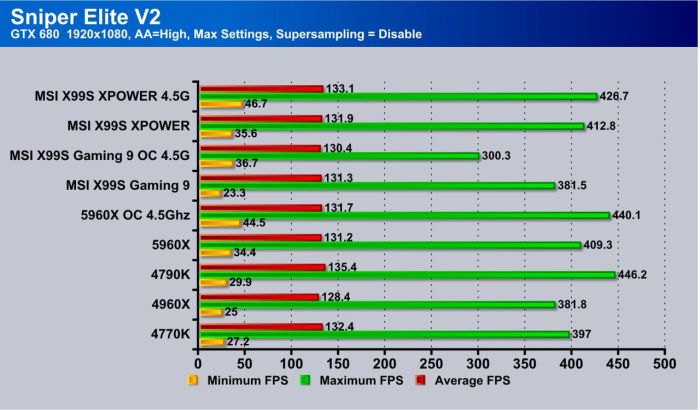 The Sniper Elite V2 shows similar scaling across the board offering well over playable FPS results but the X99 does not jump ahead in any way.

The MSI XPOWER is built for extreme performance and it doesnt just perform well but looks awesome while doing it.

The MSI XPOWER is built for extreme performance and it doesnt just perform well but looks awesome while doing it.