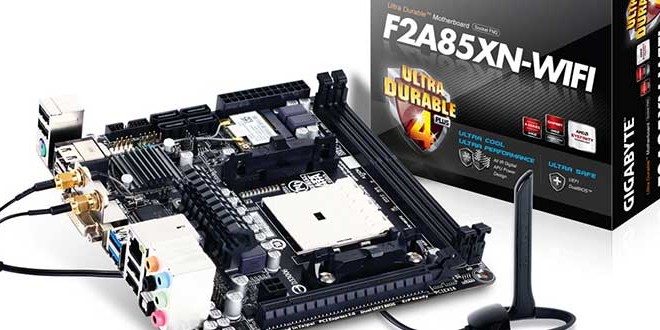 Idle the system with the board consumes 52 watts of power and under load we see the board consumes 134 watts of power. Initially we observe the board’s power consumption jumped to 142 watts but it stabilized to 134 watts. The idle power consumption is a about 7 watts higher than Asus’s board and 4 watts higher than Gigabyte’s own ATX board that we have tested. However, under load it is 8 watts fewer than the other boards we have tested.

Despite only having a four pin auxiliary ATX power connector, we were still able to overclock our A10-6800K to 4.6 GHz without much of an issue by simply raising the BCLK. This is a tad lower (100MHz) than what we were able to achieve with the Asus board. With any FM2 processor it seems like 4.5-4.6 GHz is a sweet spot before hitting the thermal headroom using an air-cooler. Any higher clockspeed would require water or more extreme cooling. Obvious, no one is going to be using the mini-ITX board for the title of the fastest overclocking but the optino is certainly there for those who wish to push their hardware a little bit more.

A quick search online and we can see that there are a handful of mini-ITX motherboards for the FM2 socket but if you want a board with the latest A85X chipset, there are only two boards available: the Gigabyte F2A85XN-WIFI and the ASRock FM2A85X-ITX. The rest of the mini-ITX boards use either the A75 or the A55 chipset.  The ASRock board is retail at about $100 while the Gigabyte’s board is about $110. For extra $10, the Gigabyte’s board includes a very robust wireless adapter that supports dual band (2.4 and 5.0 GHz) and dual stream (2×2), Bluetooth 4.0, and DualBIOS. While it may lack the number of SATA ports compared to the ASRock board, we would gladly trade a couple of SATA ports for the wireless adapter, as it probably would be more useful. The included six SATA 6 Gbps ports, four USB 3.0 and six USB 2.0 port should offer plenty of connectivity for most users.

Not only does Gigabyte bundle the board with a wireless chip, it also tosses in a rather useful WiFi share software tool in addition to others that we are familiar from Gigabyte (EasyTune6, @BIOS, and Smart Recovery). The Cloud Station seems to have some potential in this ever growing market of mobile devices but lack of proper Android support is something that we hope Gigabyte will fix soon.

The F2A85XN-WIFI’s layout does have some clearance issue if you plan to use slightly larger CPU cooler and/or large graphic card. You just got to choose your components wisely when going with the board. Given to the FM2 platform overall system build cost, Gigabyte had to make some sacrifices such lack of 802.11ac wireless adapter, but all together, the board is the best mini-ITX board out there for FM2 socket that the money can buy.

We have always believe that AMD FM2 platform offers a very good price for performance. If you are on the market for a budget small form PC to serve as a media server or a portable gaming PC, you really cannot go wrong with the Gigabyte F2A85XN-WIFI especially if you pair it with the 65W AMD A10-6700 APU.