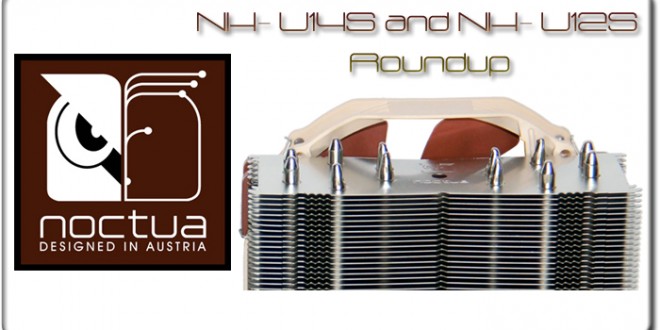 The juggernaut of elite air-cooling solutions, Noctua unleashes two new heatsinks.  Let’s examine the pair and see how they perform.

Noctua products pay special attention to engineering and design. From serious over-clockers that desire a premium air-cooled solution, to gaming enthusiasts, their products have in the past been synonymous with performance, quality, and safety. Today the evaluation encompasses four products: the Noctua NH-U12S and NH-U14S heatsinks; and their accompanying optional counterparts the NF-F12 and NF-A15 PWM fans (used for the purpose of a dual-fan setup).  MSRP on the NH-U12S is ~$65 and the NH-U14S is ~$75; for the optional fans the NF-F12 is ~$20 and the NF-A15 is ~$25.

Both of the Noctua heatsinks share many common characteristics highlighted in the chart below.  Physical dimensions and fan size do vary between the two and are listed after.

Noctua was also thoughtful enough to include two matching fans, one for each of the heatsinks so we can test them in a dual fan push-pull configuration. The common characteristics between the NF-F12 120mm and the NF-A15 150mm fans are listed below with what sets the two fans apart charted after.

Noctua’s fans are also presented in a very similar, scientific manner, delving into the fine engineering that went into crafting each model. It is apparent that research and development is taken very seriously and there is no room for cosmetic fluff or pretty lights.

In the four profile shots below, the NH-U12S is always on the left and the larger NH-U14S is on the right. The key thing to note here is that while U12S possesses five liquid cooled heat pipes per side, the U14S is equipped with six per side. Instead of highly polished surface where contact is made with the CPU, Noctua implements a type of finely grooved micro-surface,  so fine that even with dragging your fingernail across it you can barely feel it; however, if you look closely and have good eyes you can see it. With the finely regulated tension pressure of the SecuFirm2 mounting kit provided and Noctua’s specially formulated thermal paste, barely 1-2 drops of the paste is needed for an acceptable heatsink mounting, worry free.

First off let it be known that the Noctua heatsinks are going head-to-head with a personal favorite, the Thermaltake Venomous X, which is simply a Goliath of a heatsink, sporting six heat pipes per side, 2 x 120mm fans, and a nickel-plated mirrored contact surface . At the time the Venomous X was one of the few on the market that could dissipate heat fast enough for this “moderate” overclock at the mid-high range price. The test rig is pretty bare-bones but was designed purely as a gaming enthusiast machine. Keep in mind that the tests are not to see how high the overclock can go, but how well the heatsinks perform under a constant load.

Prime95 was used to stress all the cores simultaneously, while HWiNFO64, a highly customizable monitoring application, was used to collect data from the motherboard during the test.  Prime95 was run three times for each heatsink and a minimum time of approximately 4 minutes (or until it was apparent that the CPU’s temperature was not getting any hotter). On this particular sample (the Intel 2500k) anything that reached beyond 72 Celsius crashed the test rig out (no matter what the vcore was set at), so for testing validity, all successful runs where conducted at a safe and stable 4200Mhz across all cores.

Before we get to the results, let’s take a quick look at how much physical space the Noctua heatsinks take up on a standard ATX form factor motherboard. In the panel immediately below, the NH-U12S fits perfectly, even with the extra high heat spreaders on the RAM. The cabling on the main fan that comes with the heatsink is extra short to prevent cable clutter. The fan on the rear has had it’s inner anti-vibrational pads replaced with thicker ones to aid in the stability concerning air flow. Actually there’s plenty of room all around it and there would not be any issues with even using the NH-U12S on a micro ATX motherboard.

Noctua’s behemoth of a cooler, the NH-U14S, is one of the largest (and intelligently designed) heatsinks forged in Austria. Yet despite of how mammoth it is, as you can see in the pictures below, all RAM slots are easily accessed. RAM with extended heatsink spreaders are still totally compatible and with the NF-A15 mounted immediately behind them, there’s the bonus of a steady cool breeze wafting gently across the RAM. Note how very close this comes to the first video card slot, so a personal recommendation would be either to stick with standard ATX form factor motherboards, or check the compatibility list at Noctua’s website found here. It is possible to use it with smaller micro ATX motherboards, but be forewarned that the most likely scenario is sacrificing the first video slot if using a discreet video solution.

The results were quite impressive with NH-U12S gaining a 13% performance bump over the Thermalright Venomous X (which is being used as a baseline), and the NH-U14S gaining a monster 18% in cooling. Past situations with upgrading heatsinks has normally only seen a difference in a couple degrees Celsius, so this was a pleasant surprise. Again keep in mind that all of these test where conducted in a dual fan push/pull configuration. The case itself was outfitted with 3 x 230mm very low rotational fans in addition to 2 x 140mm fans for creating positive pressure — ensuring a constant and consistent air flow. Max speed on the fans where approximately 1380rpm, which fits into the range of +/- 10% variance on max rating of 1500rpm. This was the only time the fans were audible above the other fans inside the case and as for the larger NH-U14S, the fans were barely audible.  As a matter of fact, any rotational speed below 1100rpm on all fans reviewed yielded such little noise a person would have to place their ear right up to the case to hear them.

Noctua’s heatsink performance overshot expectations by quite a margin: the heat was dissipated so efficiently under maximum loads on this particular test, the NH-U14S could do even better under much more strenuous situations — a real bonus to those who are looking for a serious overclocked air-cooled solution. If you want the best cutting edge tech with the best performance, par for the course, it’s going to cost a bit more: dual fan push/pull configurations are going to be approximately $85 for the NH-U12S (that is total including heatsink and additional fan) and $100 for the NH-U14S. The advantage of such an investment is that Noctua is future-proofing future socket configurations (where technically possible) with appropriate socket back-plates. Noctua also gets top scores for not only the ease of use for installation, but including accessories for all possible scenarios. The attention to engineering and design infused into the core characteristics of these tech masterpieces highlights unparalleled innovation.

The Noctua NH-U12S and NH-U14S prove not only to be more than effective as overclocked air cooled solutions, but also provide excellent noise control emissions. They earn the Bjorn3D Golden Bear Award.

The Noctua NH-U12S and NH-U14S prove not only to be more than effective as overclocked air cooled solutions, but also provide excellent noise control emissions. They earn the Bjorn3D Golden Bear Award.