One thing to note is that we are revamping our testing method in order to better represent performance and feature offering to you guys the consumer. Also we want to make it an easier read for you without miles of endless charts. Please feel free to provide feedback on what you think as many benchmarks will be shuffled or removed completely.

*All Gaming tests were done at standard notebook resolution of 1366×768 for a great gaming experience.

We will use the following applications to test the performance of the notebook.

The results are quite good as mobile devices have very little room for airspace or cooling solutions. Im sure the more efficient Ivy Bridge and Kepler Architectures helped keep temps lower as well.

The Battery duration testing was performed by PowerMark which is a specially designed benchmark by Futuremark (Maker of 3DMark and PCMark) and shows battery expected life under different loading scenarios.

The power consumption tests are broken into 3 different loading types.

Overall having a discrete GPU that can play for a little over an hour and a half is not bad. With a higher capacity battery we think this can be quite a bit higher. 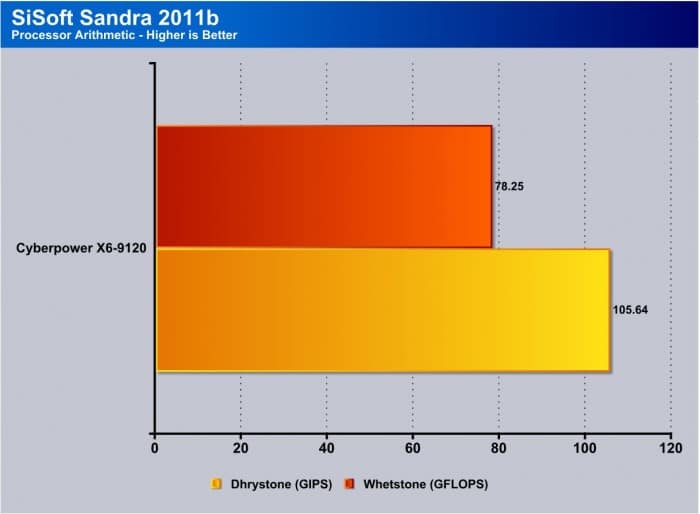 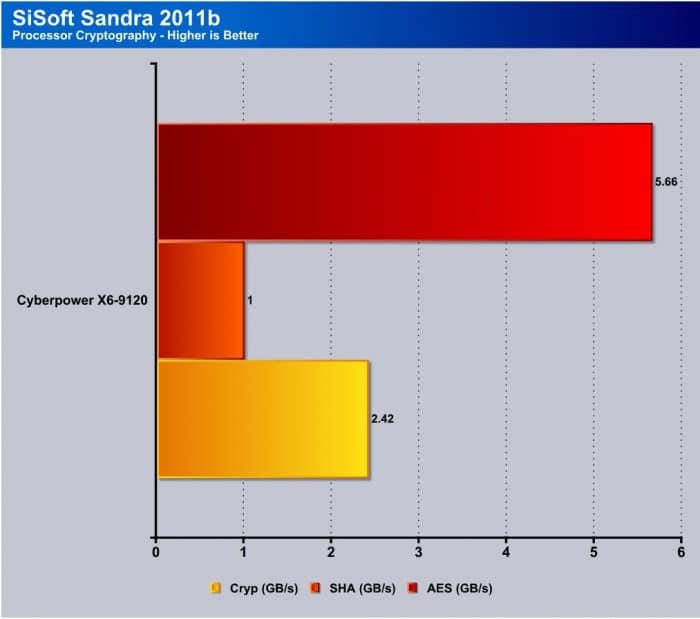 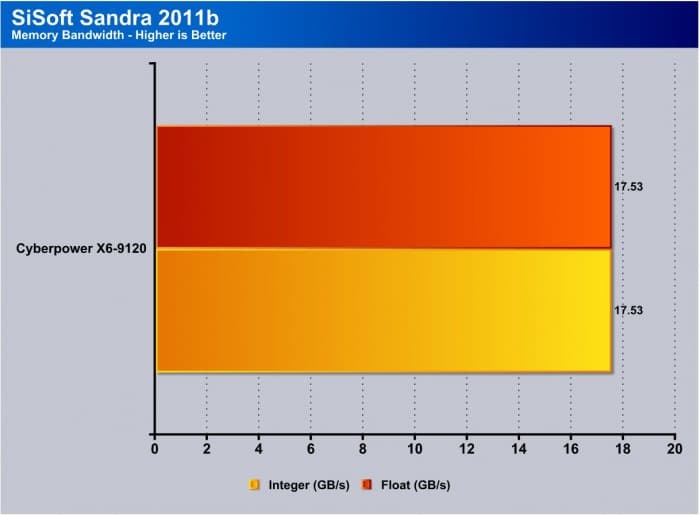 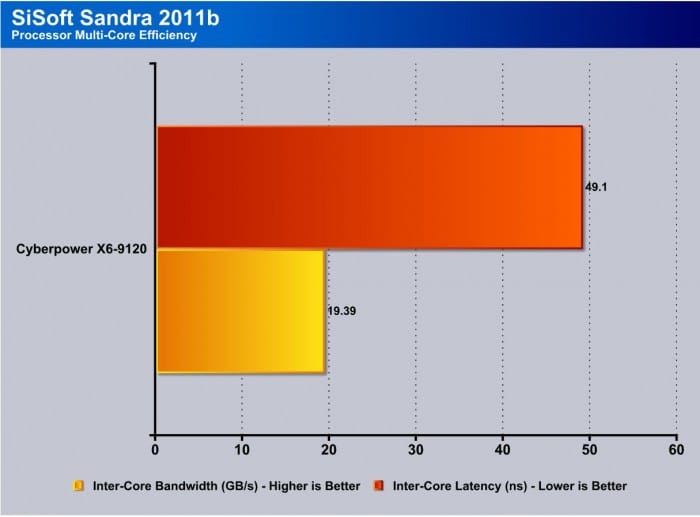 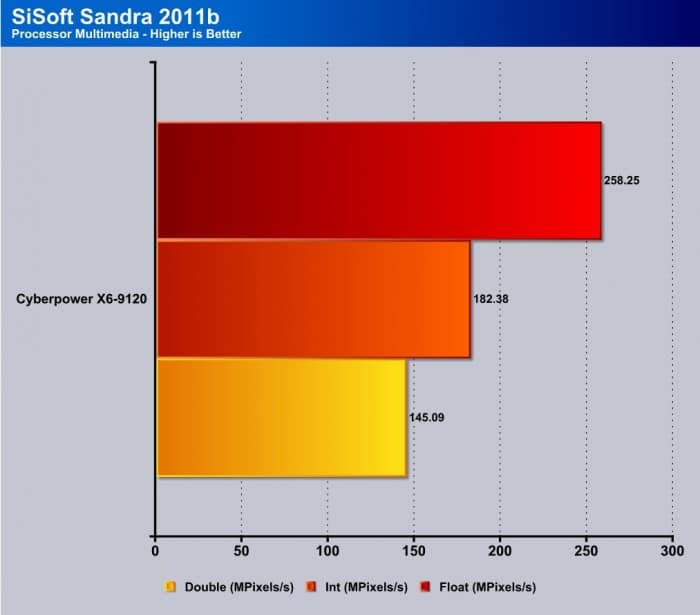 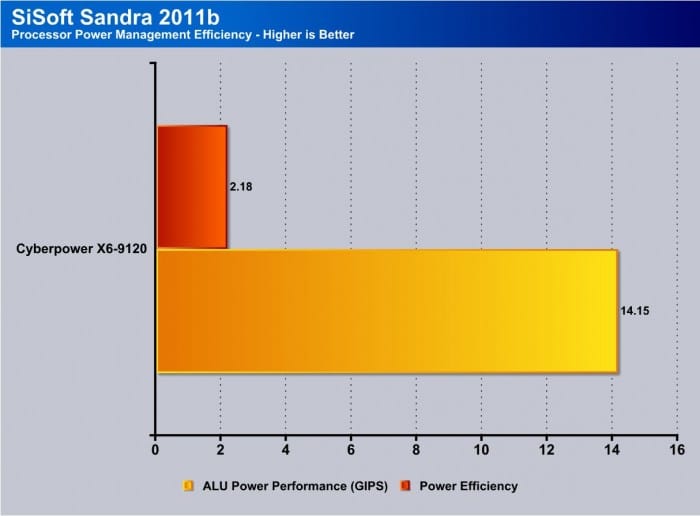 SiSoft Sandra is a awesome test to demonstrate raw numbers for a systems capability. Here we see that the Ivy Bridge platform is quite efficient and can really pull off some good numbers. Overall raw processing power is nice but we think with some higher speed ram you could see a bit more potential from the processing side of things. 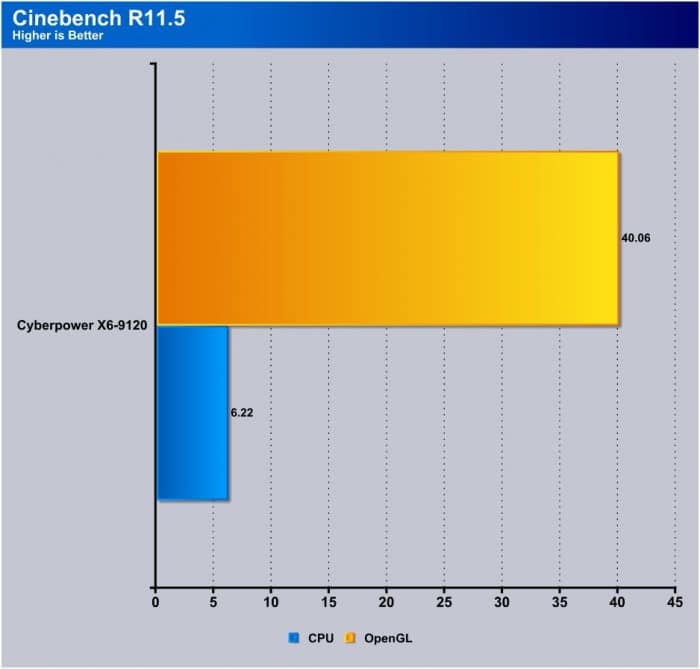 For a smaller laptop, the Cyberpower X6-9120 really shows some punch here which means mobile content professionals can rely on the hyper threaded quad core to simply do work for them. The GPU being CUDA capable means as more programs support the technology that can work in conjunction for some real processing power. 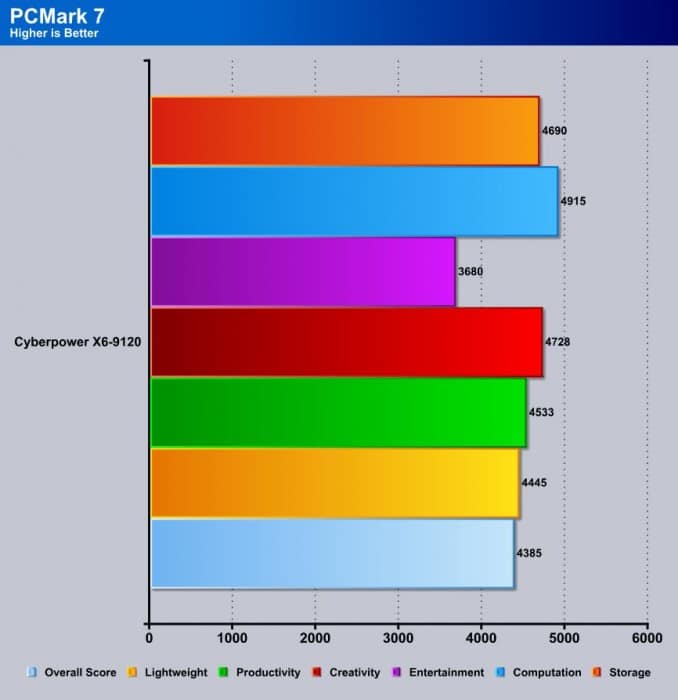 The PCMark benchmark gives a pretty good representation of system performance in multiple types of usage for your PC. Here we see that its pretty even across the board with definite prominence in the computation department due to the i7 with its 8 functioning threads.

3DMark 11 is the newest in Futuremark’s suite of benchmarking utilities.  Its a fully capable DirectX11 benchmark which also stresses and analyzes the system performance as a whole to simulate a heavy rendering environment such as a high end game or other app the end user may run.  This benchmark was run with Performance settings 5 times and all runs were averaged for the result below. 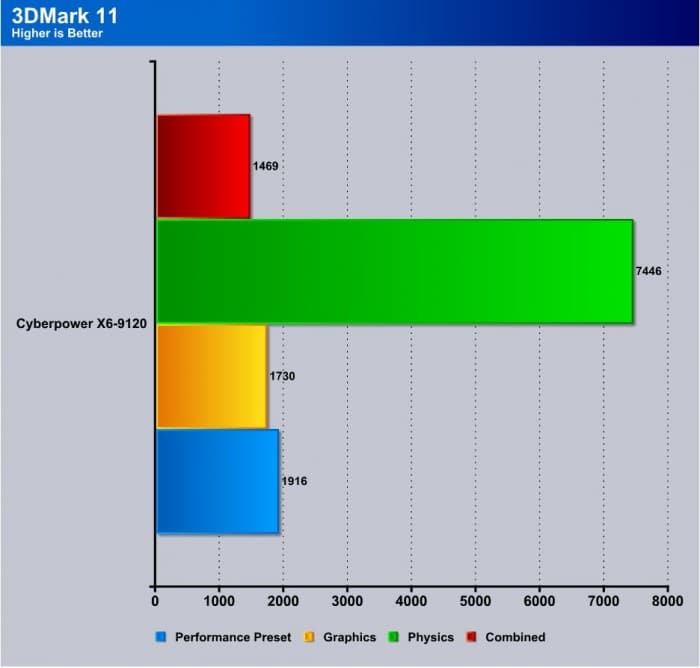 Here we see how the notebook scores on 3DMark 11 which is futuremarks newest 3D Benchmark. Here once again you can see that the CPU is definitely some leaps and bounds above GPU power as this notebook offers loads of processing power. 3D performance is not bad but this notebooks strong point is its raw CPU performance. 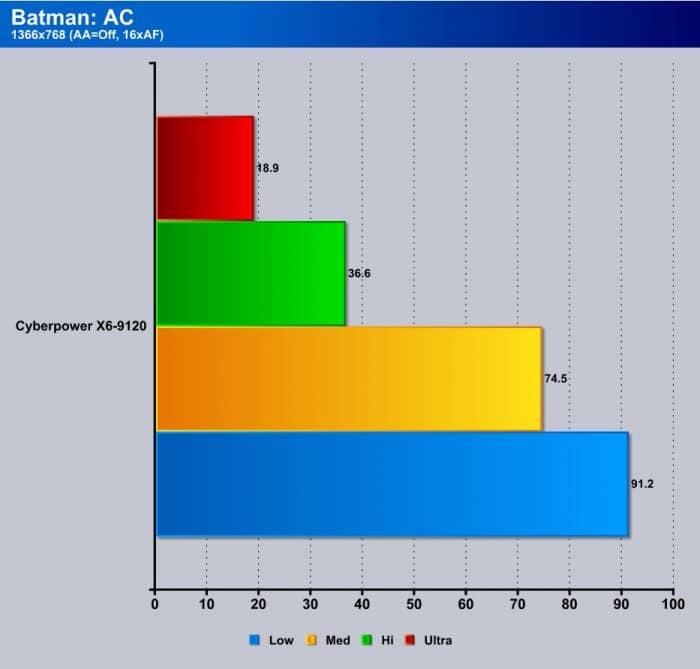 Here we see that in Batman: Arkham City all detail settings are playable up to high which averages at 36+ FPS but there are dips which get lower. Medium would be the best choice which will still provide a pretty and very playable gaming experience. 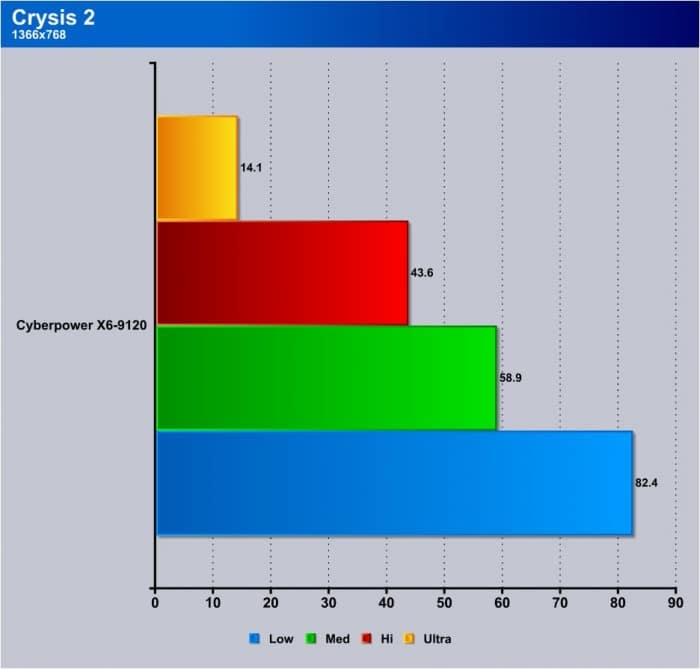 Crysis 2 was a bit more favorable as averages for high setting eclipsed 40 FPS quite easily which means even more playable detail at this setting. 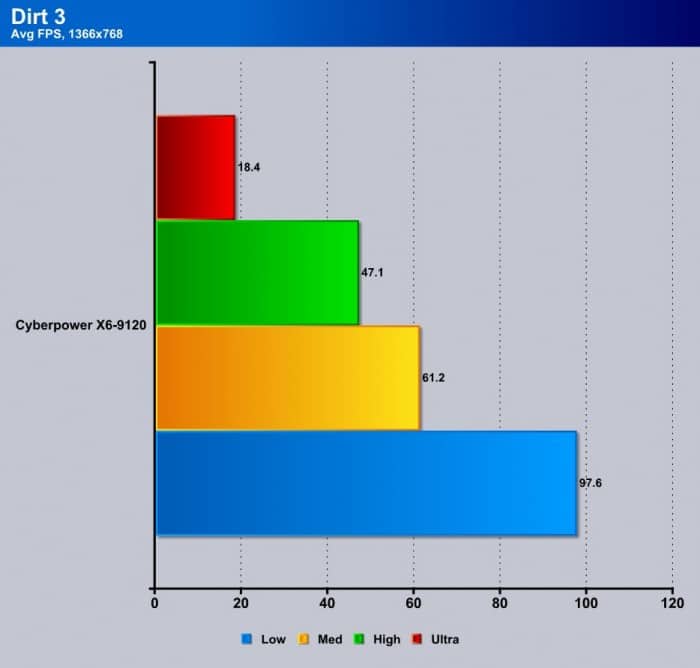 Dirt 3 provided some nice gameplay and quite capable gameplay performance at high settings as well with only minor hitches here and there with framerate drops. 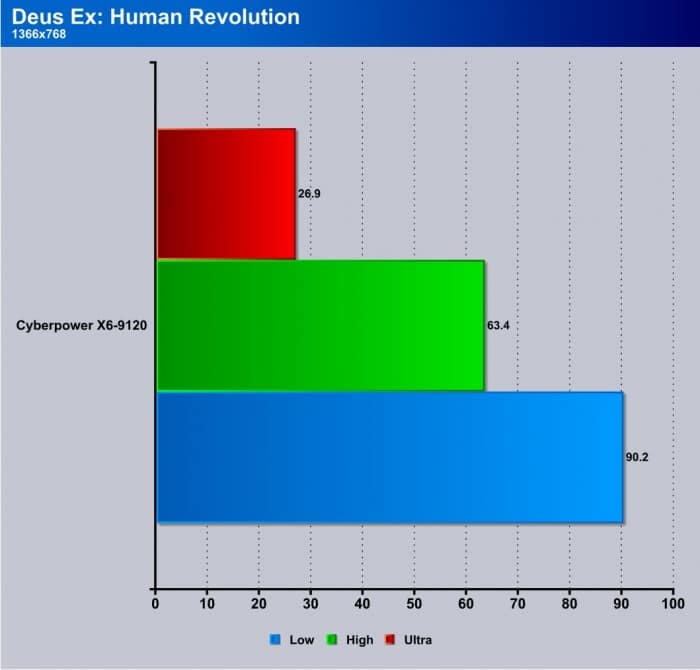 Deus Ex was more than capable of running at high settings but Ultra was a little out of reach as choppiness got in the way. 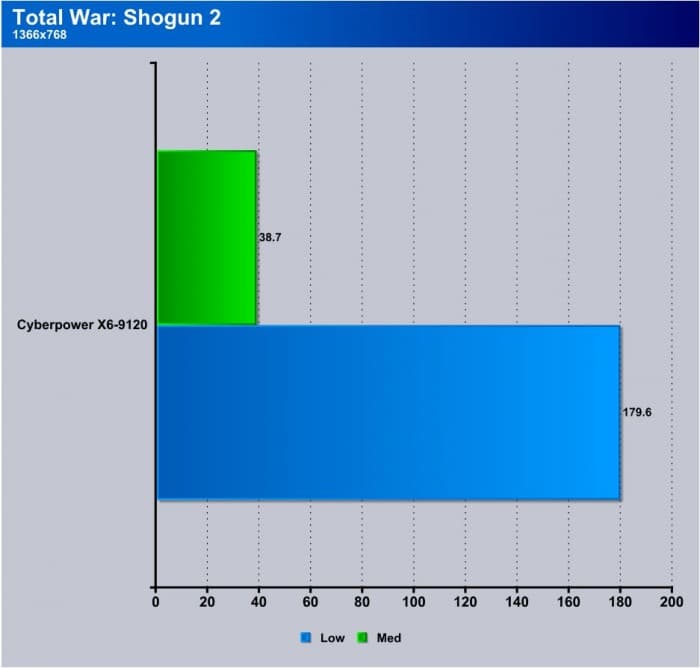 Shogun 2 is a bit newer of a game. The unit count is huge which really puts a hurt on the GPU at higher detail settings. For this reason it is tough to recommend medium as it simply can get big dips if entering the battle mode with a large army. 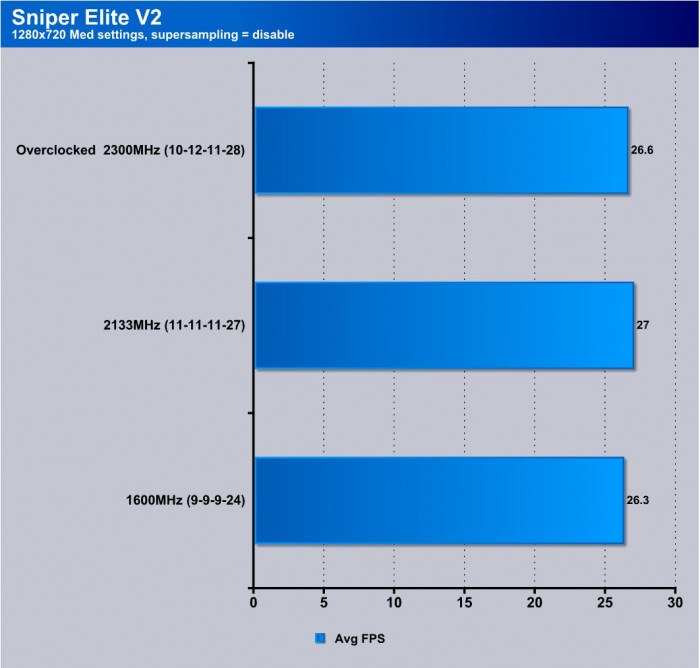 Sniper Elite V2 we had settings at medium and we were surprised that the game was almost playable at 1080p. To compare with the rest of the games, we stuck to 1366×768 where it actually does quite well. If any lags were there they must have been small because we did not really see them.

When testing components, we try to test them for their respective purpose. Considering that this notebook was made to dabble in some of everything, we feel comfortable testing it at standard notebook resolution for gaming tests and reserving the 1080p usage for HD video playback and video/photo work for content professionals. 1080p resolution gives much more screen real estate to work with and therefore also uses much more GPU power to game. If this laptop was a much more expensive unit, with perhaps a GTX670M, then we would feel a bit more inclined to test it at higher resolutions.

The inclusion of the SSD changes the whole character of the notebook as now it goes from waiting for loading to waiting for you to tell it what to do.

The only thing we could really complain about would be the piano finish on the laptop as it is simply a fingerprint and dust magnet. Also, in some spots the notebook plastic can flex a little but overall build quality feels solid.

We have no issue recommending this notebook for any student, gamer, mobile content professional or pretty much anyone looking for a high quality ultra powerful mobile rig. It simply performs well.