The NVIDIA GTX 670 is one of our favorite cards at the $400 price range due to its performance, low power consumption, and relatively quiet operational noise.  The PNY GTX  670 again follows the company’s tradition of using the reference design from NVIDIA, but what sets the PNY GTX 670 apart from other reference design GTX 670’s is the lifetime warranty and price.

PNY has been an NVIDIA partner for as far as we can remember. Unlike ASUS or GIGABYTE, which often have custom design cards with different coolers and overclocks, PNY generally stays true to the NVIDIA reference design. Because of this, PNY’s graphic cards often have great value to them as it is often one of the cheapest cards among different card manufacturers. The GTX 670 that we have here today for example, is selling at $429.99 with $30 rebate, making it one of the cheapest GTX 670’s money can buy.

While extreme enthusiasts prefer to go with non-reference cards for the added cooling, factory overclocking, or additional overclocking potential, many people simply want a card that offers the best bang for their buck. The GTX 670 is powerful enough that even at reference clockspeed the card is powerful enough to deliver very smooth gaming experience at 1080p. Thus, budget gamers will get the short end of the stick when choosing a reference, especially since NVIDIA’s GTX 670 design is not particularly bad as what we have seen in the past with other reference designed card. 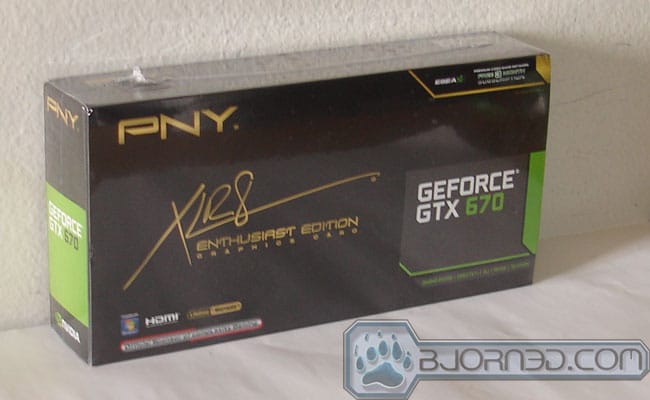 The PNY GTX 670 is shipped in a rather small box that is just slightly bigger than the card itself. This is slightly unusual for a high performance card as we have gotten used to seeing retail packages with massive boxes splashed with tons of marketing information. We are sure PNY chose minimalistic packaging to cut some of the cost down. However, at the same time, the simple package reduces environmental waste which is a major plus for us. The box primarily helps to draw customer attention at the retail shelves, but with so many people ordering their hardware online, it has become less important. What truly matters is what is inside the box.

Not only is the packaging simple, PNY has also not gone overboard with tons of marketing material on the outside of the box. Besides a few logos like the HDMI and the Lifetime warranty, and the specification of the card, we are not being inundated with excessive technical information. This maybe a good time to mention that the lifetime warranty only applies to the original purchaser who must register the product or else you only get 1 year. PNY is one of the few companies that still offers lifetime warranty on their cards but unfortunately the need for registration something that we are not particularly thrilled. Just be sure that you register the card so you can have a peace of mind.

The GTX 670 is wrapped around a plastic cutout shell to secure it from being damaged during the shipping. We would’ve preferred a little bit more protection on a $400 investment. However, our video card arrived without any damage so it gets the job done despite its weak appearance. 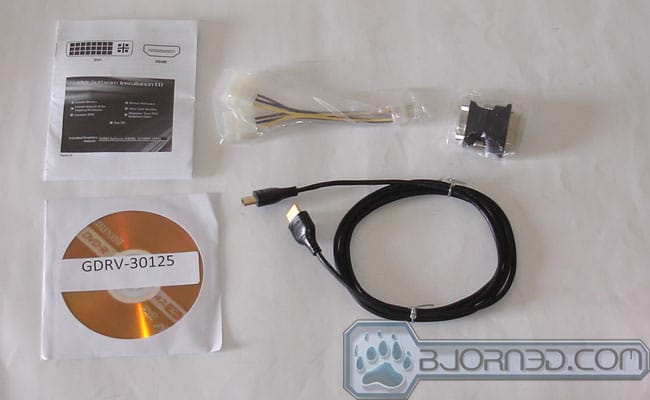 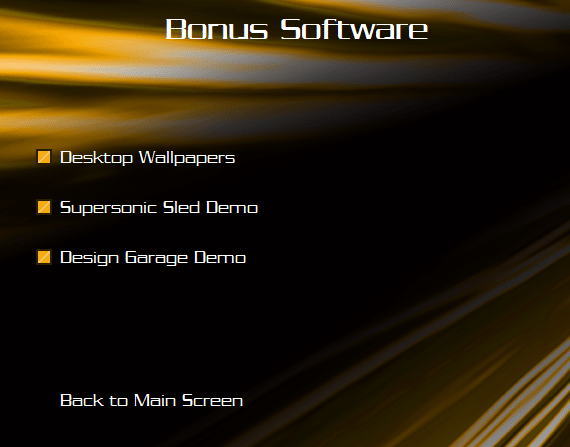 Besides the GTX 670 card, PNY also threw in a PCI-E power adapter, a DVI to VGA adapter, a 6-foot PNY branded HDMI cable, driver CD, and a Quick Start Guide. The inclusion of HDMI cable is a very nice touch as we see that other vendors do not include such cable and this maybe one of the most useful accessory among those included. There is not much additional software included besides the driver, we also get DirectX and User Guide. PNY does include Supersonic Sled and Design Garage but both software titles are only demo version. Additionally, a few desktop wallpapers are included.

While we cannot really say that going with NVIDIA reference design is always a good thing, the latest GTX 600 series from NVIDIA is actually not a bad designed card. So following the reference design is not a terribly bad choice here. Besides the logo and the sticker o the fan, the PNY GTX 670 is essentially identical to the reference card. The card sports the same black PCB and the same short PCB design with the same radial fan attached at the end. The same short PCB board means that the two 6-pin PCI-E power connectors are located in the middle of the card, such placement of the power connector is a tad unusual and would mean that you may have to stretch your power cable a bit longer to reach to the connector than the usual placement at the end of the card.

In addition to the power connector, we also have two gold connectors on the top of the card ready for the 2-way and 3-way SLI. The rear of the card is where we will find the video output ports. Like the reference card, we get one dual-link DVI-I, one dual-link DVI-D, one HDMI 1.4a and a full size DisplayPort. While mini DisplayPort has gained popularity among display makers, the inclusion of the full-size DisplayPort would make it easier to use if you still have a monitor that supports such port. In addition, we get the exhaust grills located on the rear, again exactly like the reference card.

The fact that the PNY GTX 670 uses the same reference design means that it uses the same radial cooler which is somewhat unfortunate. Our biggest gripe with the GTX 670 is the flimsy and fragile feel of the cooler that occupies the right side of the card. The noise-level of the cooler is also a tad loud under load compared to the GTX 680 despite their similar looking. While it is not vacuum cleaner loud, it is definitely audible. The idle noise is quieter, however.