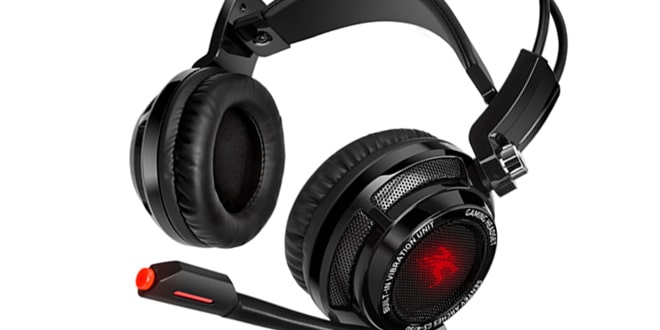 Today we are taking a look at the Sentey Arches GS-4730 gaming headset. The Arches headset is from Sentey’s Elite Gamer Series of products, and has some really nice features that helped it achieve a great rating from us. Lately it seems like every hardware vendor is releasing their own line of peripherals. Everyone from motherboard and GPU manufacturers to RAM and SSD shops seems to have their own headset line, or keyboard and mouse combo. Sentey is definitely not new to the peripheral market, and has quite the line-up to choose from, with their Elite Gamer Series being in the middle of their offerings. Follow along as we look over the Arches headset.

Sentey offers the Arches headset in both black and white color schemes to fit your aesthetic needs. Our review unit is the black model and has a product code of GS-4730, while the white version is a GS-4731. Both units offer the same features.

Below is a look at all the specifications that Sentey lists on their site for the Arches GS-4730. 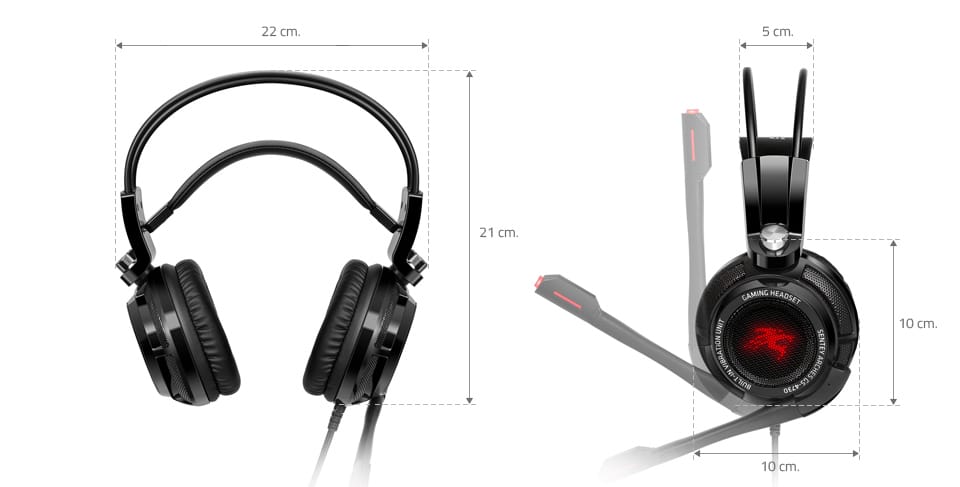 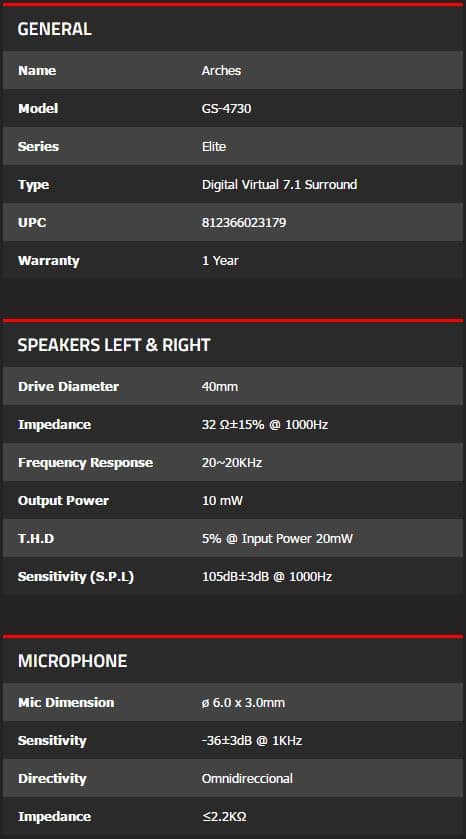 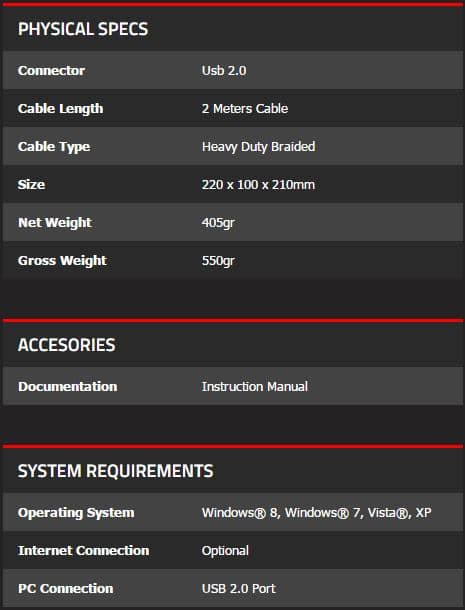 Similar to other Sentey products that we have recently reviewed, the Arches headset comes in a nice box that highlights the features of the headset. While we haven’t seen any Sentey products in an actual retail setting, their packaging would definitely catch our eye, and promote a high-end look. 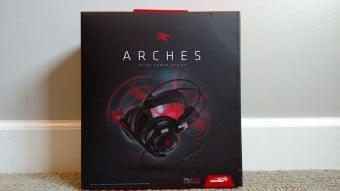 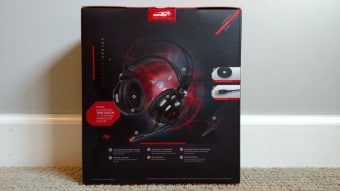 The most striking visual aspect of the Arches headset in our opinion is the large size of the ear cups. These large ear cups each house a 40mm capable of producing sounds in the oft touted 20Hz-20KHz range. Each ear cup has a glowing Sentey logo that lurks behind a metal mesh material when the headset is plugged in. The polished plastic frame on each ear cup really looks nice with the mesh highlights. Both ear cups swivel slightly to allow for a comfortable fit on a range of head shapes and sizes. 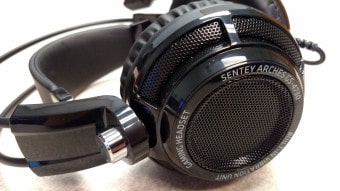 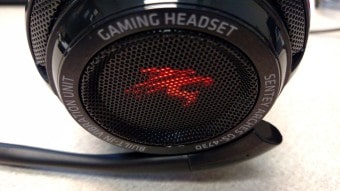 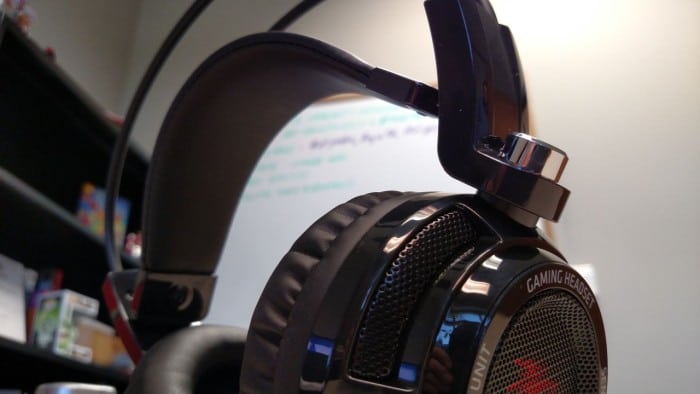 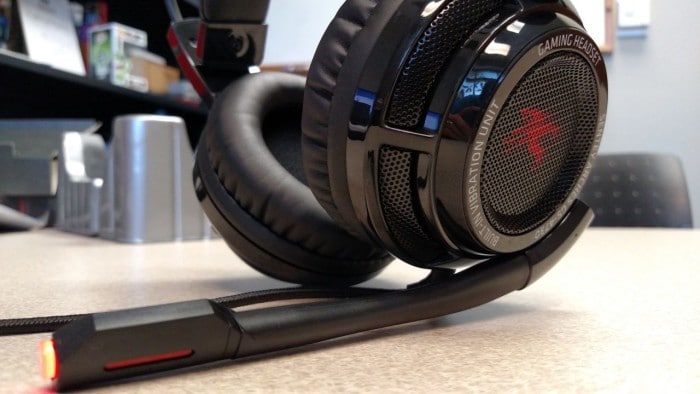 Inside each ear cup is a soft foam material that covers the speaker area and feels nice against your ears. Surrounding the ear cup and providing a comfortable fit is a faux leather type of material. 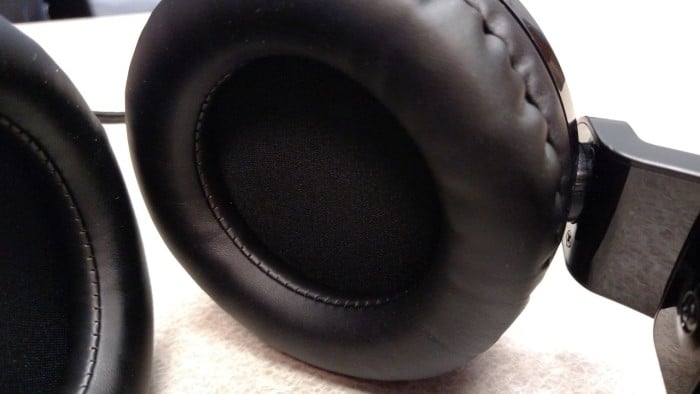 The suspension-sytle headband found on the Arches headset has a bit of padding that provides just enough tension to keep the headset in place. A simple “Sentey” imprint adorns the top of the headband. Making up the overhead “frame” of the Arches are two rods that provide just the right amount of lateral pressure. 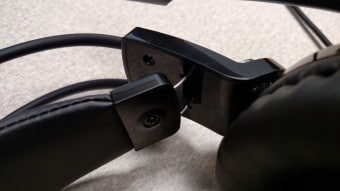 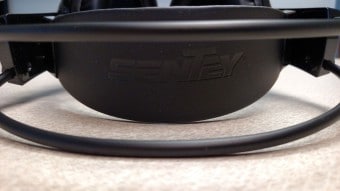 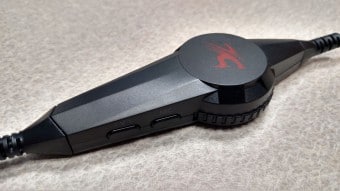 The Arches headset comes with a very basic software package that allows for a few adjustments to be made to the headset. We did not spend much time with the software, as it is very basic and provides no real adjustment options. 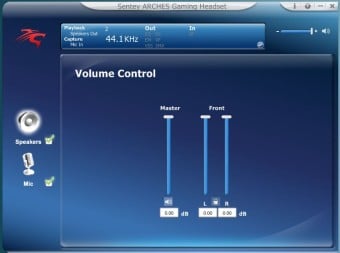 We don’t profess to be master audiophiles here at Bjorn3D, but we do have some standards that we like to hold our audio devices to. Since the Sentey Arches is heralded as being a gaming headset, most of our testing was performed in a gaming environment. We did however run the headset through a playlist of various songs that feature a wide variety of sounds and styles to get a good feel for how the headset performs outside of it’s gaming duties.

As mentioned earlier, the Arches headset features dual rods that connect the two sides of the unit together. These plastic rods provided us with just enough squeeze to keep the headset in place, but not so much that it was uncomfortable. Our ears were comfortable for hours on end, although the faux leather material can sometimes trap heat and cause a little bit of moisture build up between the ear cup pads and your face. The light at the end of the microphone arm proved to be a bit distracting as we mentioned earlier. Unfortunately, the microphone is enabled as soon as you plug the Arches headset in, resulting in the mic light being lit up right away as well. We would have liked to have seen an On/Off switch that keeps its setting at all times, as opposed to a button that resets with each insertion of the USB plug.

We have been playing a lot of Blizzard’s Heroes of the Storm recently, and the sounds of battle rang out loud when using the Arches headset. The same can be said when we were playing Marvel Heroes 2015. The character sounds and battle ambiance were all very clear. One thing we did find lacking was the low-end performance of this headset. No matter what settings we changed, we just couldn’t get the Arches to produce deep lows. Now, when we enabled the vibration function, we were able to feel some of the more “impactful” sounds, but we found this feature to be slightly annoying. In some instances the vibration seemed to be a bit too zealous. We turned off the vibration function for most of our testing period, as it didn’t seem to add enough value to make up for the annoyance.

Our playlist features a variety of styles of music from hip-hop tracks to 60’s and 70’s classic rock. Artists from Daft Punk to Creedence Clearwater Revival make an appearance on our testing playlist, and in all instances, we once again found the Arches lacking on the low end. The upper end of the audible spectrum sounded fine, although a little more high end clarity would have been welcome, but we were constantly hoping for more “oomph” from this headset. With the vibration function enabled, we were able to get some simulated low end performance, but we could tell that it was a physical feeling and not the actual low bass that was providing the rumble. 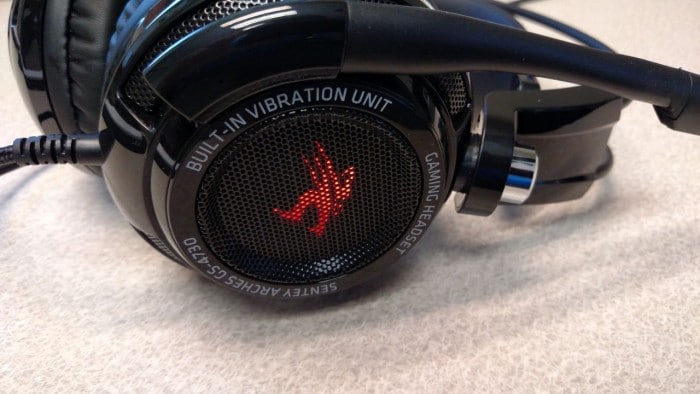 When we looked at the Sentey Arrow headset, we found it to be lacking in quite a few areas and thankfully, the Arches headset performed much better. The Sentey Arches gaming headset really shines in the build quality category, even though you won’t find any fancy aluminum or other exotic materials. Although the ear cups are constructed with plastic, their shape and form give them a high-end look, despite their low selling price of $40. This is just another example of Sentey providing a product at a low price that you would probably find for twice the price from any other manufacturer. That is something we can all be happy about.

Another thing we really liked about the Arches headset was the level of comfort it provided, even during long gaming sessions. The amply padded ear cups are soft enough to feel nice against your head, but not so soft that they have trouble keeping the headset in place. The headband is also quite comfortable, and adjusts to fit a wide variety of head sizes.

There were a few issues we had with the Arches headset and they include the glowing microphone tip, and the lackluster low-end performance. While neither is a deal-breaker, the glowing mic tip is distracting, and the bass could be a little stronger. While you can enable the vibration setting of the headset, we found it to be distracting. The included software from Sentey was also very basic.

All things considered, the Sentey Arches GS-4730 Gaming Headset has just earned the top spot on this reviewer’s list of headsets. The quality found in the Arches headset, along with the great price will be tough to beat.

The Sentey Arrow GS-4730 Gaming Headset provides the comfort and quality found in many high-end, and high-priced, headsets, at an affordable level.

The Sentey Arrow GS-4730 Gaming Headset provides the comfort and quality found in many high-end, and high-priced, headsets, at an affordable level.