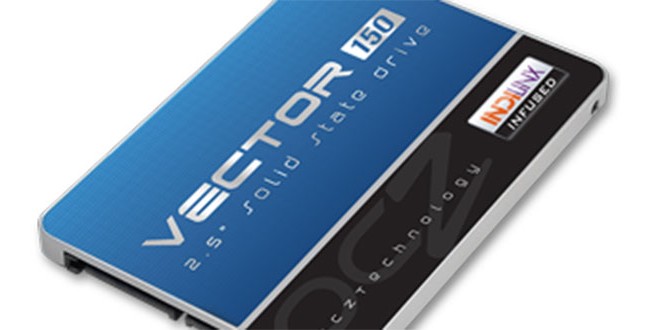 OCZ has launched the successor to the popular Vector SSD with the Vector 150. The Vector 150 improves upon IO performance and drive durability with 50GB of host write per day for 5 year. Most SSD on the market use 20GB host write as the benchmark for the drive’s durability so OCZ is taking the drive endurance to the next level. OCZ also implements flash management tool that can analyze and dynamically adapt to increase NAND vulnerability.

Building off the success of the original Vector SSD Series, the Vector 150 SSD Series implements industry-leading performance by delivering consistent, sustained speeds over time regardless of whether the data is in compressed or uncompressed formats. It provides superior speeds across all capacities to dramatically accelerate gaming, content creation, and multimedia applications, supporting read bandwidth of up to 550 MB/s, write bandwidth of up to 530 MB/s, 4K random read speed of up to 100,000 input/output operations per second (IOPS), 4K random write speed up to 95,000 IOPS and sustained 4K random write performance of 26,000 IOPS.

“Our Barefoot 3 architecture continues to leverage leading-edge controller technologies to deliver our highest performing SSDs to date enabling computing users with faster file transfers and boot-ups, as well as a quicker, more responsive overall storage experience,” said Ralph Schmitt, CEO for OCZ Technology.  “With workstation class endurance, advanced data integrity and supported by a 5-year warranty, Vector 150 users can feel confident that their SSD will deliver ultimate performance even in the most demanding client computing environments.”

Engineered to provide superior endurance, Vector 150 SSDs are rated to deliver 50GB of host writes per day for a 5-year warranty term, promoting peace of mind that this series will outpace even the most demanding client computing environments over an extended lifetime. OCZ’s powerful Barefoot 3 controller features an advanced suite of flash management tools that can analyze and dynamically adapt to increasing NAND vulnerabilities as flash cells wear and is designed to overcome limitations associated with MLC NAND flash memory and heighten data integrity over the long term.