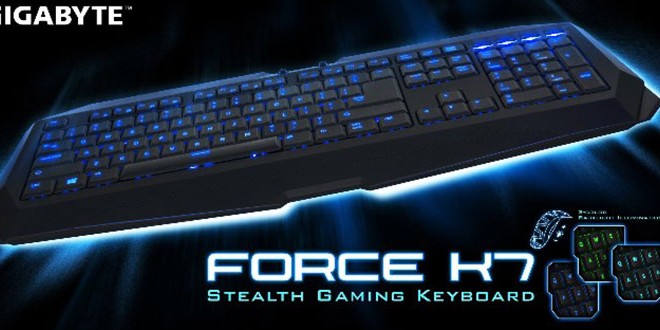 Gamers often prefer clicky feeling of the mechanical keyboard. But no matter how good a mechanical keyboard is, it is still rather expensive and the clicky noise can be somewhat bothersome for those who are used to the membrane type keyboard. Even the quietest mechanical that uses Black switches is noticeably louder. 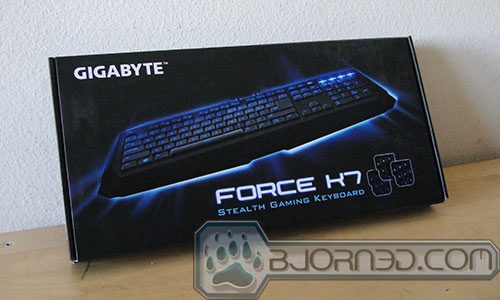 If you work primarily with laptops (as many do), and just occasionally play games on your PC, then you may find the noise on the mechanical keyboard too loud for you. If this is you, then you may want to check out the the Gigabyte Stealth Force K7 keyboard that we gt here today. 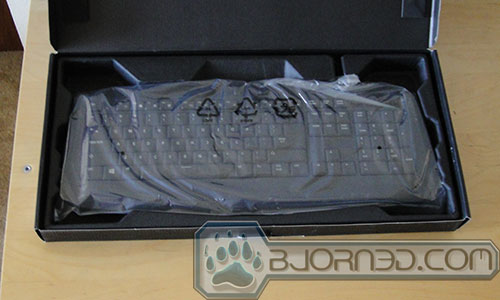 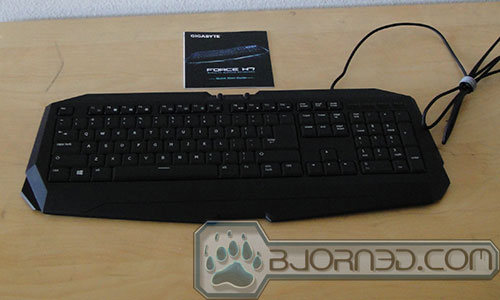 Externally, the Stealth Force K7 Force is going with the tough feeling that may appeal to some gamers. Like its name, the Force K7’s angular and flat design that mimics the Stealth aircraft and the black color also complements the plane. 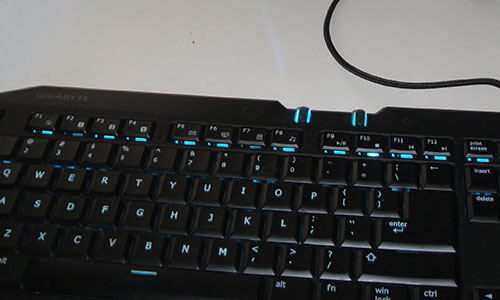 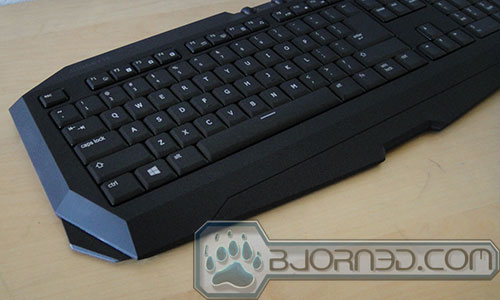 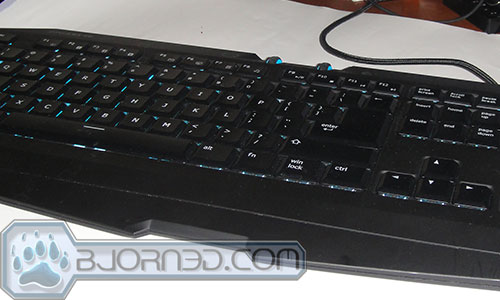 The Force K7 features backlit LED. Three switchable illumination color are provided: blue, green, and cyan. The aforementioned backlit can be turned on and off and the brightness can be adjusted with the dynamic wheel based control. The rubberized control moves smoothly as you gliding up and down to adjust the brightness. The backlight is not particularly bright even when cranked up to the highest level but it is visible in a poorly lit room. Since the wheel scrolls infinitely, there is no way to know that if you have reached the maximum brightness except that you will notice that the backlit is no longer getting brighter as you keep scrolling. Tapping on the wheel will cycle between three available colors and off. We find it is a bit easily to accidentally press the button while rapidly scrolling the wheel.

Carefully inspecting backlight, we noticed uneven brightness and some lights leaking from the edge of the keycap when looking at they keyboard at an angle. While this has no way impacting the usability of the keyboard, it is slightly distracting see see even lighting. 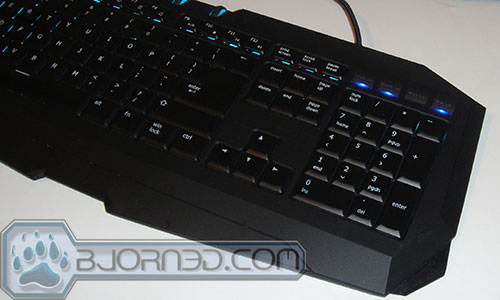 We a bit puzzled how come Gigabyte did not implement the same backlit color scheme on the Numlock/CAP/SCR Lock/WIN lock. While the backlit keys are not particularly bright, the LED indicator for these keys are pretty bright, almost too bright in our opinion.

A few special functions are included with the Force K7. When press the Fn+ F1~F12 keys, it will activate the specialized functions. The location of the Fn key is on the right hand side of the keyboard just next to the Alt. Personally, I prefer using the left hand side for the Fn button. As there is no Fn lock keys, you always need to press both the Fn key and the F1~F12 key simultaneously to activate the command. The functions include opening sites such as home, Google, Facebook, and Twitter. It also opens commonly used applications such as mail, task manager, calculator, and music. In addition, we can also use it to control music playback, which is nice.

As the keyboard is designed for gamers in mind. It features a dedicated Win lock (located just next to the Fn key) to disable Windows button so you will not accidentally return to the desktop in the middle of an intensive battle. It also features anti-ghosting feature to the WASD cluster. Seven simultaneous key-press can be activated together: Q/W/A/S/D/Left Shift/Space.

The Force K7 does not require any special driver as you just plug in the keyboard to any available USB port and you are set. It works with Windows XP/ Vista/7/8. Even the function keys are all working without a hitch in our Windows 7 machine. We do love the plug and play nature of the keyboard. One minor drawback without any special driver is the fact that you would not be able to reprogram some of the special keys or create any special key combos. If you do not like what is included, you just have to live with it.

The Force K7 comes with a 1.8 meter long nylon-braided cable that connects to the USB port on the PC. Gigabyte even included a Velcro-style cable-tie to the cable, a nice touch. Sadly, there is no additional USB port on the keyboard for your other peripherals, which is something we often find in more expensive gaming keyboard. The bottom of the keyboard features textured rubber that provides better grip to the surface so that the keyboard does not slides even on glass. The two adjustable feet are also rubberized for better grip.

We find that even with the feet stand, the keyboard is a bit too flat. In addition, the integrated palm rest that looks lengthy but in practice is a bit too short. When the hand is on the keyboard, we often find the edge of our palm is outside of the keyboard which makes it harder to press the keys.

The keys have a good feedback and tactile response. Quick typist may find that it is not as springy for quick typing as the scissor switch lacks the bounciness of the mechanical keyboard and you may have to hit the keys a bit harder if you are used to the mechanical keyboard. Though if you are using notebook as your primarily device or other scissor switch keyboard, then you should not have issue typing on the keyboard. It provides good feedback for typing. Thanks to the short traveling distance, you do not have to hit the keys too hard for the key to register. This also translate to much quieter operational noise compare to some scissor switch keyboards. I do, however, prefer to have the large backspace key that is found on many keyboards since I do quite a lot of typing and the larger backspace is simply more convenient.

We tested the anti-ghosting feature with the N-Key Rollover test, and was able to get all seven keys (W, A, S, D, Q, shift, space) registered simultaneously without any issue. We did notice that while pressing two keys next to each other like A+S on the keyboard, some keys around the combination will not register. For the keys around WASD, we notice that E, Z, X, C sometimes will not register. So you have to carefully mapping the key combination if you use more than the 7 keys predefined for the anti-ghosting.

With the Stealth Force K7, Gigabyte is trying to offer the best of both world to satisfy both the typist and gamers or provide those who seek to have a quiet keyboard for typing and gaming. While the keyboard offers a good mixture of features for both world, it also suffered in a few areas that made it otherwise the perfect keyboard. The keyboard offers decent typing experience but the shallow key, especially around the edge of the keyboard made it hard to type fast and precise. As for the gaming portion, the anti-ghosting, dedicated volume, Win Lock are neat features. The shallow keys and the scissor switch worked as well as it can at offering good response at low noise-level in games.

The keyboard if far from perfect but at retail price of $49.99, it is priced relatively affordable compare to other gaming keyboards on the market. Obviously, if you are a die hard mechanical keyboard enthusiasts, you would not be looking for anything else. However, if you are bothered by the clicky noise of the mechanical keyboard and want something that is quiet and offers decent performance, the Gigabyte Stealth Force K7 is certainly worth considering.

With the scissor switch, the Gigabyte Stealth Force K7 keyboard offers typists who are also gamers a keyboard that is low profile and has low noise.

With the scissor switch, the Gigabyte Stealth Force K7 keyboard offers typists who are also gamers a keyboard that is low profile and has low noise.