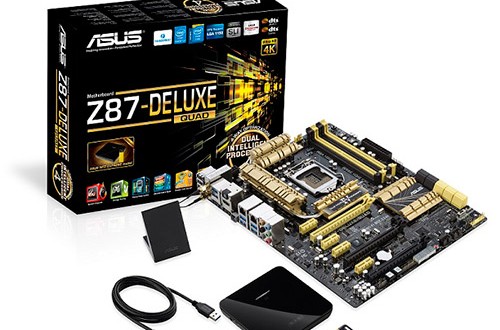 Due to the cost, Thunderbolt port only appears on high-end motherboards and laptops. As a result, we have not seen the market filled with devices equipped with such port. As you may recall, Thunderbolt is Intel’s solution to essentially unify every external I/O ports (display, graphics, storages, etc) to a single connector. With up to 10GB/s bi-directional bandwidth, it doubles the speed that USB 3.0 offers, and is backward compatible with USB 3.0 ports.

The second generation Thunderbolt doubles the bandwidth of the first generation to 20Gb/s by combining four 10Gb/s channels into two 20Gb/s channels. This allows the port to have enough bandwidth to support the 4K displays that are appearing on the market. The second gen is also backward compatible with the first gen Thunderbolt so that you can still use it with older devices.

ASUS once again is being the first to come out with a motherboard equipped with the second generation Thunderbolt. The ASUS z87-Deluxe/Quad motherboard is equipped with two 20Gb/s ports for up to 12 simultaneously connected devices. Combining the two Thunderbolt ports with the onboard HDMI port, it is possible to drive a total of three 4K displays at once.

Check out the official release below for more information and the specification.